The Danube Commission has had its seat in Budapest for 60 years. Magyar Posta is commemorating this anniversary with an overprint of the stamp block Danube Bridges originally issued in 1985. The special postmark for the block uses the sixtieth anniversary logo. The overprint was designed by István Weisenburger and produced by the banknote printing company Pénzjegynyomda Zrt. The new issue will be available at large post offices and Filaposta in Hungary from 22 September, but may also be purchased from Magyar Posta’s online store. 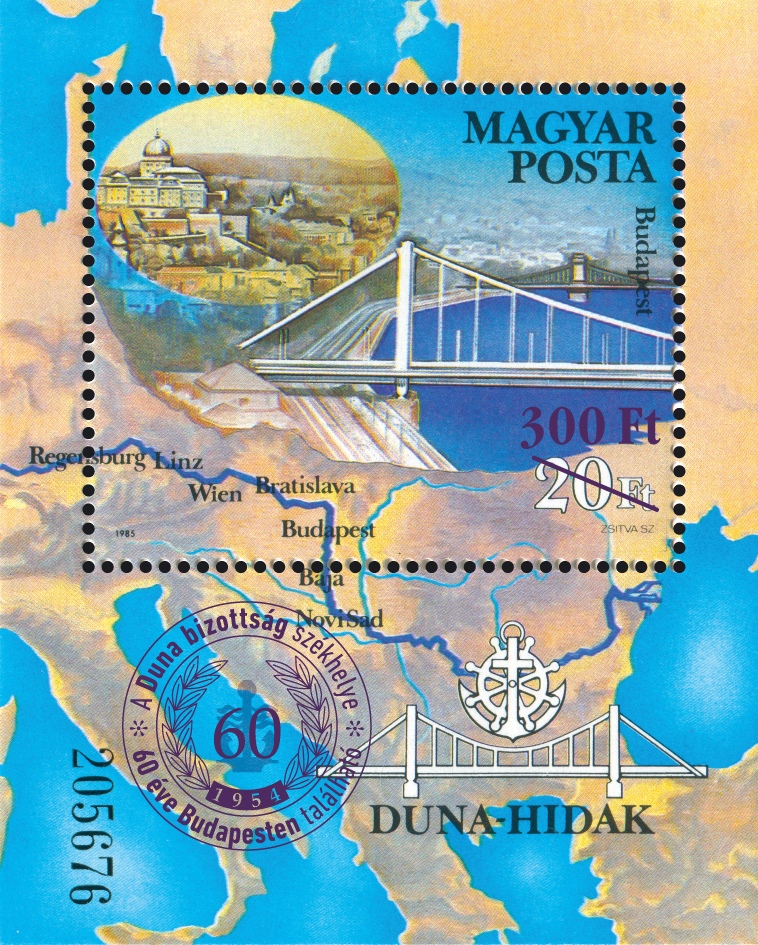 The Danube Commission is an international organisation that promotes cooperation for the free navigation of the Danube. The Commission has its seat in Budapest and its official languages are German, French and Russian. Its member states are Austria, Bulgaria, Croatia, Germany, Hungary, Moldova, Romania, Russia, Serbia, Slovakia and Ukraine. The member states are committed to maintaining the navigability of the section of the river in their country for inland and, where appropriate, marine shipping, undertaking necessary maintenance works and developments to enhance navigation conditions, and ensuring that shipping is not obstructed in the navigable channels of the Danube. The Commission is responsible for navigation on the Danube, and monitors environmental pollution, safety and the registration of ships, boats and other vessels. (Source:danubecommission.org) The seat of the Danube Commission has been in Budapest for 60 years. To mark this anniversary, Magyar Posta has overprinted the stamp block Danube Bridges issued on 12 February 1985. The new face value of the block is HUF 300. At the bottom left of its border is the logo of the Danube Commission with the inscription “The Danube Commission has been based in Budapest for 60 Years” in Hungarian.