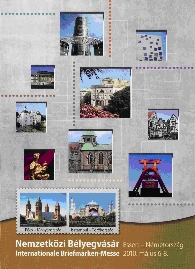 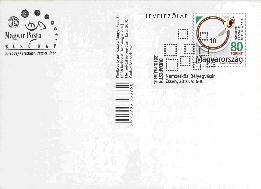 On the picture side of the special postcard with an imprinted value of HUF 80 – selling price on release HUF 130 – there is a spectacular graphic composition showing some of the sights of one of the European Capitals of Culture, Essen in Germany, which is hosting the International Stamp Fair: the second tallest skyscraper in the province of North Rhine-Westphalia, the RWE tower; the 35 x 35 x 35 m, four-storey enormous block, the building of the Zollverein School of Design and Management; the Saalbau building, the home of the Essen Philharmonic Orchestra; the Hügel Villa, once the summer residence of the Krupp family famed for its weapons production; the mediaeval district of Kettwig; Schloss Borbeck, the baroque building favoured by tourists; Essen Cathedral and the Golden Madonna kept there, which is believed by some researchers to be the oldest known sculpture of the Virgin Mary, and the old Zollverein coalmine which today operates as a cultural centre. This industrial landmark is now a UNESCO World Heritage site and has become an unofficial but perhaps the best known symbol for the whole of the Ruhr area. In the lower part of the postcard there is a building typical of each of the other two European Capitals of Culture, Pécs Cathedral and Hagia Sophia, the church of Holy Wisdom in Istanbul.

The postcard’s stamp design features the logo of the Essen International Stamp Fair and the design of the special postmark used a stylised version of the same logo.