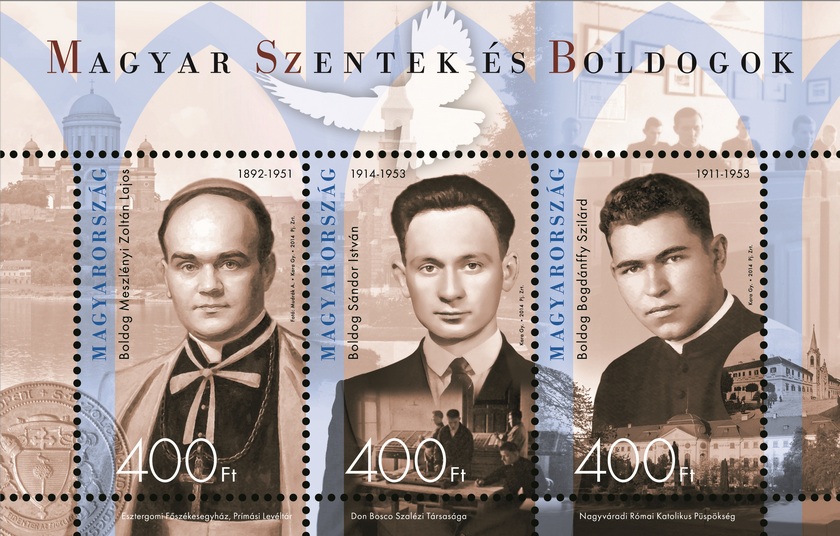 Magyar Posta is presenting the theme of Hungarian saints and blesseds through a series of stamps to be issued over several years. The next piece in our philatelic series commemorate three martyrs who lost their lives as victims of the communist dictatorship. The stamps of the miniature sheet depict Blessed Zoltán Lajos Meszlényi, Blessed István Sándor and Blessed Szilárd Bogdánffy. The unusual feature of the issue is that, apart from the standard version of the miniature sheet, special and monochrome editions are also being released. The miniature sheet was designed by György Kara and produced by Pénzjegynyomda. The new issue will be available at main post offices and at the Filaposta from 25 February but it can be ordered online from Magyar Posta’s internet shop as well. 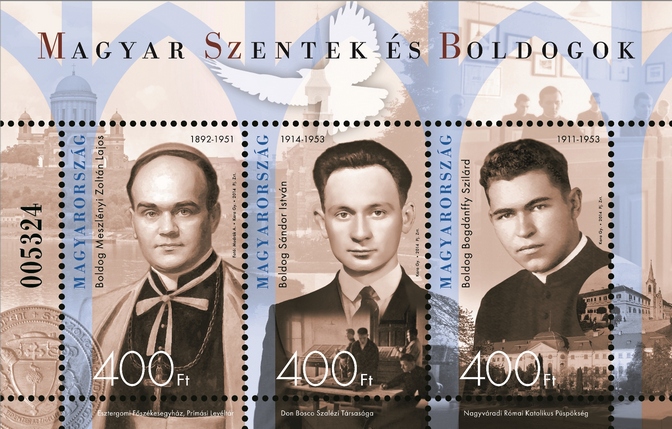 Blessed Zoltán Lajos Meszlényi (1892-1951) was a priest at the Diocese of Esztergom, and its suffragan bishop from 1937. His canonical work was noteworthy. The reason for his arrest was that he was appointed titular bishop to replace the imprisoned József Mindszenty instead of the person supported by the state. He was sent to an internment camp, where he died shortly afterwards as a result of inhuman treatment. He was beatified on 31 October 2009. Blessed István Sándor (1914-1953) trained as a printer during his time as an aspirant monk of the Salesian Society. While serving his order, he was involved in the education of children and taught religion. When religious orders were banned, he continued his activity illegally and chose not to emigrate although he had the opportunity. He was sentenced to death in a show trial and hung in 1953. Despite being tortured, he was not willing to confess to a fabricated story. He was beatified on 19 October 2013. 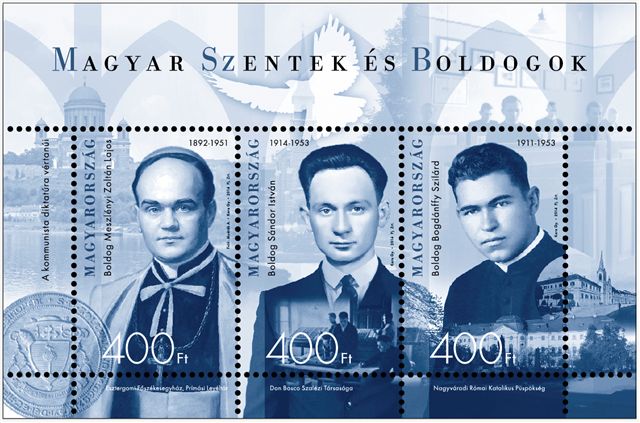 Blessed Szilárd Bogdánffy (1911-1953) was a priest, religious educator and seminary teacher, and clandestinely ordained bishop of Oradea (Romania). In 1948, at the request of his bishop, he organised and held a secret seminary. In 1949 he was ordained a bishop in secret and was then arrested. After four years in prison, he was sentenced to 12 years' hard labour. The physical tribulations suffered at the Aiud labour camp led to his death. He was beatified on 30 October 2010. 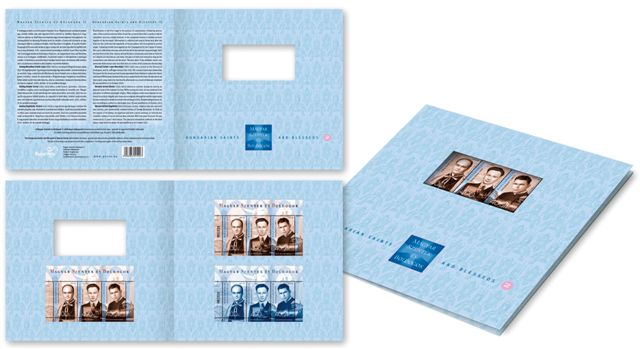 HUNGARIAN SAINTS AND BLESSEDS II:
Order code: 2014040040011 (standard edition),
2014040060012 (standard editionFDC),
2014042040011 (special edition),
2014042060012 (special editionFDC),
2014041030011 (set)
Date of issue: 25 February 2014
Face value: 1.200 Ft
Purchase price of the set:3.990 Ft
The standard version is made by offset printing. The offset printed special edition has silvermotifs which are enhanced by diffraction film and embossing, lending the miniature sheet a shiny surface.
Number of copies: 30.000 (standard edition),
10.000 (special edition),
5.000 (monochrome edition).
5,000 copies were made of the set, which contains a special edition numbered from 1 to 5,000 and a similarly numbered philatelic monochrome edition. The latter is sold only as part of the set. The monochrome edition may not be used to pay for postage.
Perforated size: 30x45 mm
Cut size: 110x70 mm
Printed by Pénzjegynyomda
Sources of design was made available by the Esztergom Cathedral, the Esztergom Primatial Arcives, the Salesiani di Don Bosco and the Oradea Diocesan Archives.
Designed by György Kara