The Millennium The Hungarian Holy Crown

The Hungarian Post Office has delighted stamp collectors with several philatelic treats in the year of the millennium. Outstanding dates and figures, and historical and cultural events have been commemorated in the stamp designs of ordinary postage stamps, and commemorative blocks and small sheets of stamps. As a finale to the stamps issued on the theme of the millennium, a block of stamps bearing the Hungarian Holy Crown and worth HUF 2001 is now being brought out. 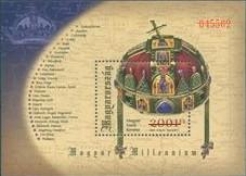 The basis of the mediaeval world order was the divine right of kings and for this reason the transfer of power was executed through the church by the prelate conducting the coronation. The most important parts of the service were the royal oath, the benediction, anointment with consecrated oil, the handing over of the regalia of power and the enthronement. The crown is undoubtedly the most important of the symbols of monarchy among the Hungarian coronation insignia. Rules governing the coronation throughout the mediaeval period were summarised in the 15th century thus: “The Hungarians have three laws and whoever transgresses one of them shall not be deemed the lawful king. The first states that the King of Hungary shall be crowned with the Holy Crown. The second that he shall be crowned by the Archbishop of Esztergom. The third that the coronation shall be held in Fehérvár.”

The stamp block is a real philatelic speciality as it has graphic features which can be seen with the naked eye or only in ultra violet light. The crown and in the background a map together with a list of places where the crown has been kept are visible with the naked eye. What is special about the block of stamps is that genuine 23 carat gold leaf was used in the embossed printing of the crown. In ultra violet light a list of the crowned kings of Hungary appears. The laser perforation is unique in Hungarian stamp production and further adds to the special nature of the block. This is the first time that stamps have been issued in Hungary using this security device. By turning the block towards the light, the word “POSTA” can be seen like a watermark in the top left-hand corner.