BICENTENARY OF THE BIRTH OF LOUIS BRAILLE 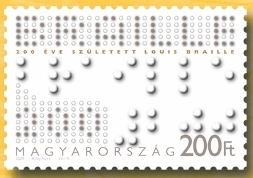 BICENTENARY OF THE BIRTH OF LOUIS BRAILLEDate of issue: 15 October 2009Louis Braille (1809-52) was born in a village near Paris and at the age of three lost his sight as the result of an accident. He injured his eye while playing with a sharp tool in his father’s workshop. An infection set in and soon he lost his sight in both eyes. At first he went to school with sighted children and learnt by hearing. When he was ten, he won a scholarship to the Institute for the Blind in Paris but, contrary to expectations, the teachers there only spoke to the children. Although there were a few large books with raised letters in the Institute’s library, these were very heavy and difficult for the blind children to read.

In 1821 an army officer, Charles Barbier, visited the school and showed the blind children his invention called “night writing”, a secret code of 12 raised dots that allowed soldiers to share information in the dark without speaking. This secret writing gave Braille the idea and the basis for devising his writing for the blind. He reduced the number of dots to six and by the age of fifteen created a complete writing system.

After finishing school, he played the organ in a Parisian church. Later, in 1826, he was given a teaching post at the French school for the blind. As a teacher he was guided by the goal of developing a full system for the blind. He was not satisfied with transcribing letters and numbers, and added mathematical symbols and musical notation to the alphabet for the blind. He made steady progress and was not deterred by society doubting that he could successfully teach his pupils using his dot writing. As a result of his work, the first book written in Braille was published in 1829.

Braille died of tuberculosis on 6 January 1852. His body now lies in the Pantheon in Paris. He was honoured for giving the blind the key to universal knowledge and learning about the world. 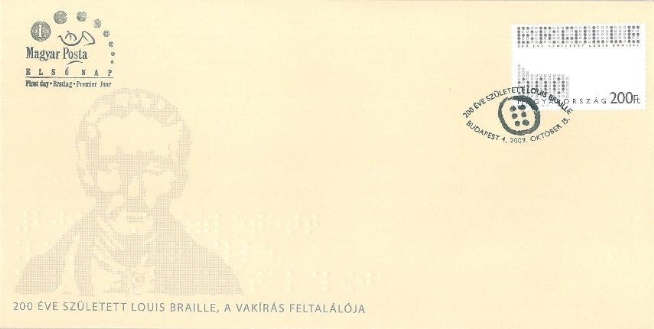 The special feature of the stamp marking the bicentenary of the birth of Louis Braille, the inventor of writing for the blind, is that the legend “BRAILLE 200” is also written in Braille. There is likewise writing in Braille on the first day cover for the stamp, and the special postmark contains a stylized graphic design of a combination of an eye and dots used in Braille writing.
SO