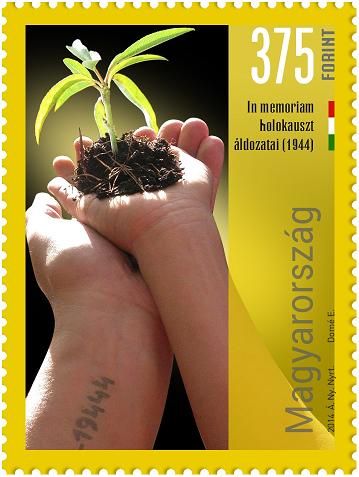 Magyar Posta is issuing a commemorative stamp in remembrance of the victims of the Holocaust. The design of the stamp remembers the victims and symbolically conveys the message of renewal and rebirth. The stamp was designed by the graphic artist Eszter Domé and produced by the ANY Security Printing Company. The new issue will be available at large post offices and Filaposta in Hungary from 28 April, but may also be ordered from Magyar Posta’s online store.

Between 1941 and 1945 more than 400,000 Hungarians fell victim to the labour camps, deportation, brutality, the death marches, mass execution and the concentration camps. Every tenth victim of the Holocaust and every third victim of Auschwitz-Birkenau, the largest National Socialist extermination camp, was Hungarian.
On 19 March 1944 the German army occupied Hungary. The first phase was the introduction of laws totally separating the Jews from Christian society, which was followed by their collection in major cities and finally their deportation. The first wave of measures was adopted at the government meeting held on 29 March 1944. The rights of Jews were limited in approximately a hundred decrees. On 28 April 1944 Prime Minister’s Decree no. 1610/1944 on the regulation of certain matters concerning the dwellings of the Jews and the designation of the residence of the Jews, the “Ghetto Decree”, was issued. On the same day, as the first step of the mass deportation that was to begin in mid May, the first death train carrying over 1,800 people left Kistarcsa near Budapest for Auschwitz. Between the middle of April and the end of May almost the entire Jewish population of Hungary was confined to the ghettos and collection camps, and in the largest deportation exercise of the Holocaust approximately 430,000 people were transported between 15 May and 9 July 1944. (F: wikipedia.org, infovilag.hu, hdke.hu)