Magyar Posta is issuing a special miniature sheet stamp entitled "Hungarian old-timer motorcycles". On each denomination of the miniature sheet containing twelve stamp designs a vehicle is shown from the Maróti Motorcycle collection, and the background design is decorated with a montage of contemporary photographs ad newspaper articles. On the special envelope the picture of a letter-collecting motor-tricycle can be seen, which was built on the basis of the plans of János Csonka and belongs to the collection of the Postal Museum. The special postage stamp shows a stylised motorcycle wheel with spokes and a valve, where the tyre is formed by words. The special feature of the miniature sheet is that for the first time in the history of issuing Hungarian stamps, the offset printing method was supplemented with so-called 3D UV varnishing, as a result of which the surface of the motorcycles slightly stands out of the plane of the paper sheet and has a unique glitter. The new stamp was produced by Prime Rate and Pénzjegynyomda, using the photographs of József Maróti, based on the plans of Attila Elekes, stamp designer graphic artist. The new product is available from 9 September at big post offices and at Filaposta, and it can also be ordered from Magyar Posta's webshop. 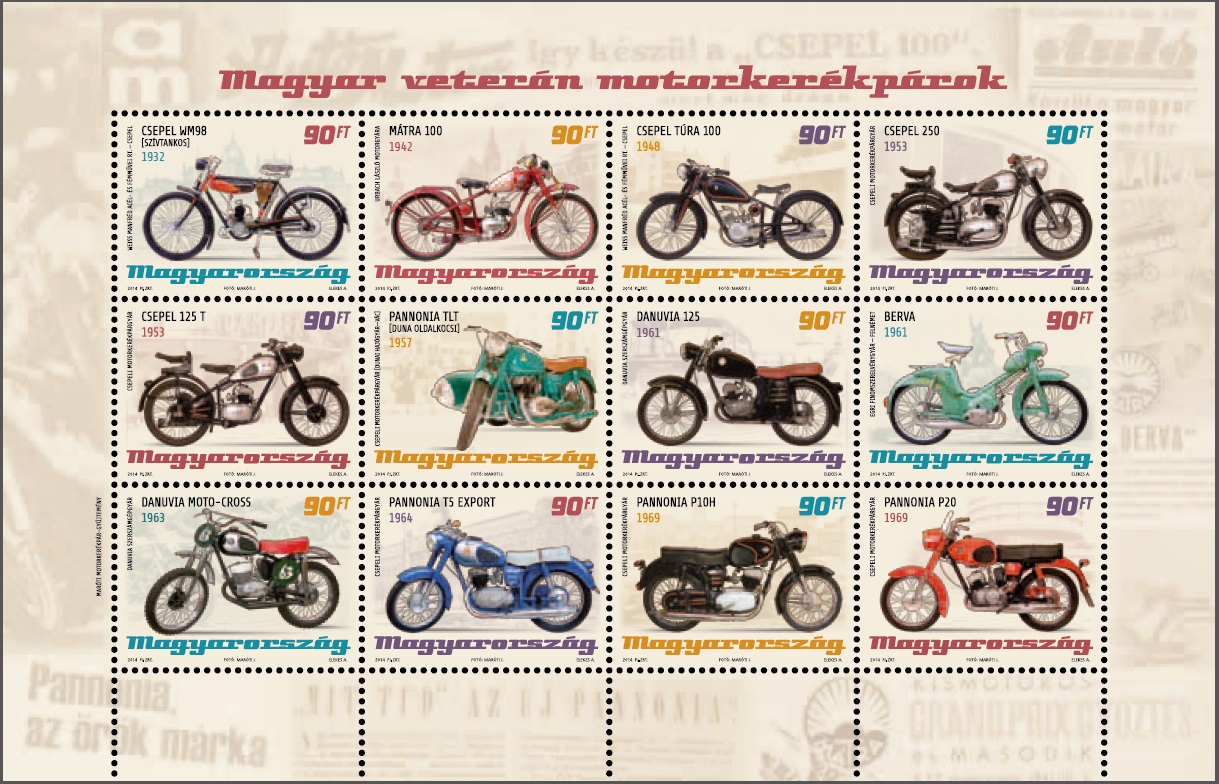 It was the Royal Hungarian Post Office, which, in 1900, for the first time in Europe, automated letter and parcel delivery by using the tricycle designed by János Csonka. By this Magyar Posta acquired unquestionable merits in the history of Hungarian motorcycle production technology. The twelve Hungarian motorcycles shown on the miniature sheet represent the most popular motorcycles manufactured in Hungary. The last Hungarian motorcycle production line finished its operation in 1975 in Csepel. (Source: marotikonyvker.hu)On the individual stamp designs, from left to right, in the order of their year, the following motorcycles and related background compositions can be seen: Csepel WM98 with the contemporary view of the Hungarian Houses of Parliament; Mátra 100 with the contemporary Fisherman's Bastion and the Church of King Mathias; Csepel Túra 100 with a stop along the Budapest Cog-wheel Railway on top of Széchenyi Hill; Csepel 250 and the People's Stadium in Budapest; Csepel 125 T with the main entrance to the contemporary amusement park of Budapest; Pannonia TLT (Duna side-car) with a street view after the revolution in 1956; Danuvia 125 manufactured in Zugló, a district of Budapest, with an Ikarusz bus on Heroes' Square; Berva manufactured near Eger, standing on Dobó Square in Eger; the sporty Danuvia Moto-Cross in a contemporary racing environment; Pannonia T5 Export with Hotel Gellért in the year when it was opened; Pannonia P10H with the Buda Castle and the Chain Bridge, and Pannonia P20 in the year when the Round Hotel of Budapest was opened.