The House of Parliament in Budapest ranks among the world’s most beautiful public buildings. Since 2012 its special architectural solutions have been dealt with and presented in a new philatelic series. As part of this series, the commemorative miniature sheet of eight stamps issued in 2014 features the speaker’s reception halls and some of their distinctive features. In the centre is a label decorated with a silhouette of the House of Parliament. The stamp was designed by the graphic artist Eszter Domé using the photographs of József Hajdú and produced by the ANY Security Printing Company. The new issue will be available at large post offices and Filaposta in Hungary from 3 October, but may also be purchased from Magyar Posta’s online store. 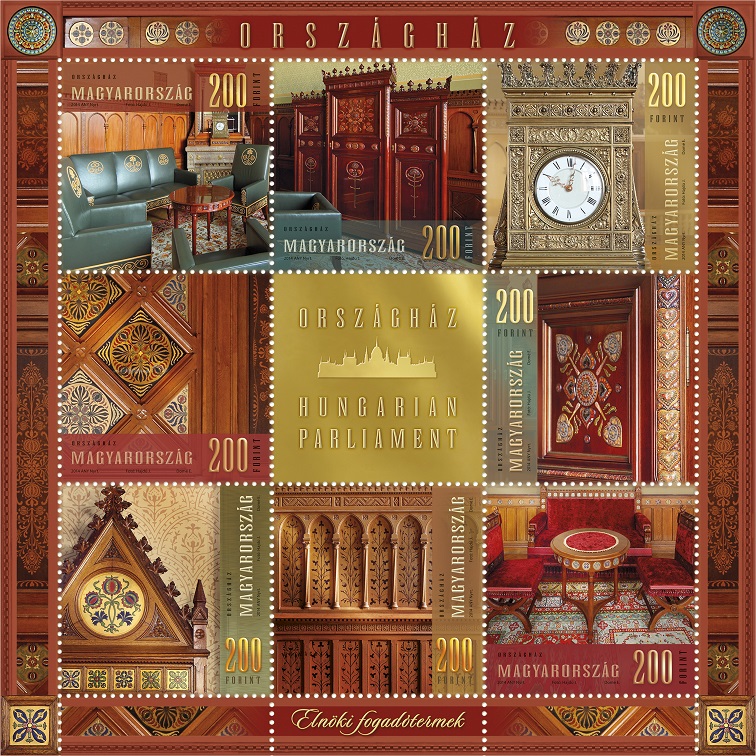 The Parliament building has 200 offices, including rooms for the Prime Minister, President of the Republic and the Speaker. The stamps of the miniature sheet show the Speaker’s reception halls, which are not on view to the public. The stamps depict the interior or details of the parliamentary office of the incumbent Prime Minister (No 36 on the main floor), which is at present the room of the President of the Republic, and the reception hall of the speakers of the former House of Magnates (No 67 on the main floor), which is now the office of the Sergeant-at-Arms.  The mahogany furniture in the office of the incumbent Prime Minister was designed by Imre Steindl and made in 1899 at Endre Thék’s workshop in Üllői Street. The suite of furniture was displayed at the 1900 Paris Exposition Universelle, where it won a gold medal, before it was transferred to the House of Parliament. In addition to the extant desk, bookshelves, wardrobe and drawing room table, the complete suite of furniture included a set of armchairs, a shelf and a porcelain washstand. Several hundred eosin-glazed porcelain decorations made in the Zsolnay manufactory endow the suite with a unique quality.