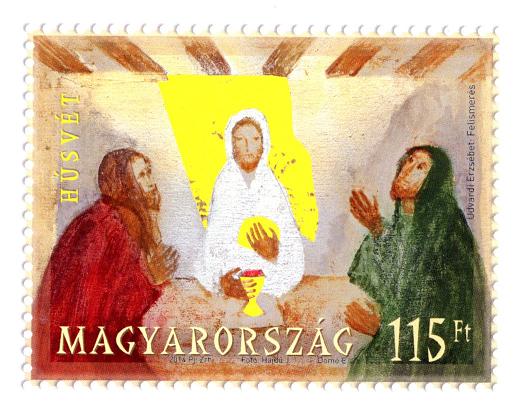 To celebrate Easter, Christianity’s most important feast, Magyar Posta is issuing a regular postage stamp with a face value of HUF 115, on which the painting Recognition by the Kossuth Prize-winning artist Erzsébet Udvardi can be seen. The stamp design depicts the recognition of the Redeemer when breaking bread and the two disciples who encountered the risen Jesus on the way to the village of Emmaus. The apostle Luke mentions them in the Bible, but only names one of the two, Cleopas. The stamp was produced at the banknote printing company Pénzjegynyomda using a photograph by József Hajdú and the design of the graphic artist Eszter Domé through a combination of offset and gold foil printing. The new stamp will be available at large post offices and Filaposta in Hungary from 28 March, but may also be purchased from Magyar Posta’s online store.

“Now that same day two of them were going to a village called Emmaus, about seven miles from Jerusalem. They were talking with each other about everything that had happened. As they talked and discussed these things with each other, Jesus himself came up and walked along with them; but they were kept from recognising him.
He asked them, ‘ What are you discussing together as you walk along? ’ They stood still, their faces downcast. One of them, named Cleopas, asked him, ‘ Are you the only one visiting Jerusalem who does not know the things that have happened there in these days? ’” (Luke 24: 13-18)

“As they approached the village to which they were going, Jesus continued on as if he were going further. But they urged him strongly, ‘ Stay with us, for it is nearly evening; the day is almost over. ’ So he went in to stay with them. When he was at the table with them, he took bread, gave thanks, broke it and began to give it to them. Then their eyes were opened and they recognised him, and he disappeared from their sight.” (Luke 24: 28-31)On the first day cover the painting Thomas Meets the Risen Christ by Erzsébet Udvardi in the church of the Holy Cross, Fertőd and the Biblical quotation “Blessed are those who have not seen and yet have believed” (John 20: 29) appear. 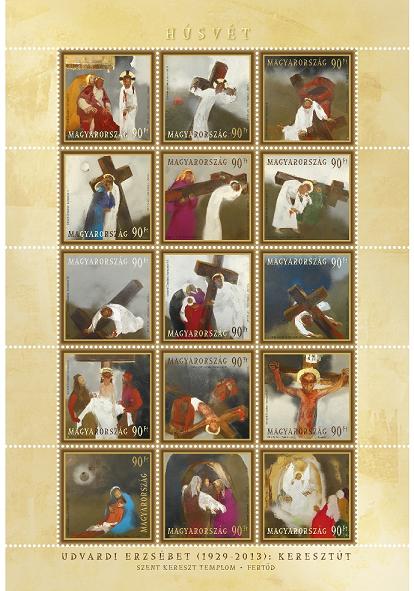 To celebrate Easter in a unique manner in the world of philately, Magyar Posta presents the passion and resurrection of Jesus in a miniature sheet of fifteen stamps. The miniature sheet features the paintings entitled The Way of the Cross by the Kossuth Prize-winning artist Erzsébet Udvardi (1929-2013) in the church of the Holy Cross in Fertőd, which were reproduced using a combination of offset and foil printing. The new miniature sheet will be available at large post offices and Filaposta in Hungary from 28 March, but may also be purchased from Magyar Posta’s online store.

Besides the central figure of the paintings, the suffering Jesus as he walks the Way of the Cross, other figures depicted are Pontius Pilate condemning Jesus to death and a Jewish high priest (I), the soldiers carrying out the execution (III, X, XI), Jesus’ holy mother, Mary, (IV, XII), Simon of Cyrene (V), Veronica (VI), Joseph of Arimathea asking for the body of Jesus (XIV) and Mary Magdalene, Mary the mother of James and Salome (XV). The subject of each of the paintings in the order of the stamps is: 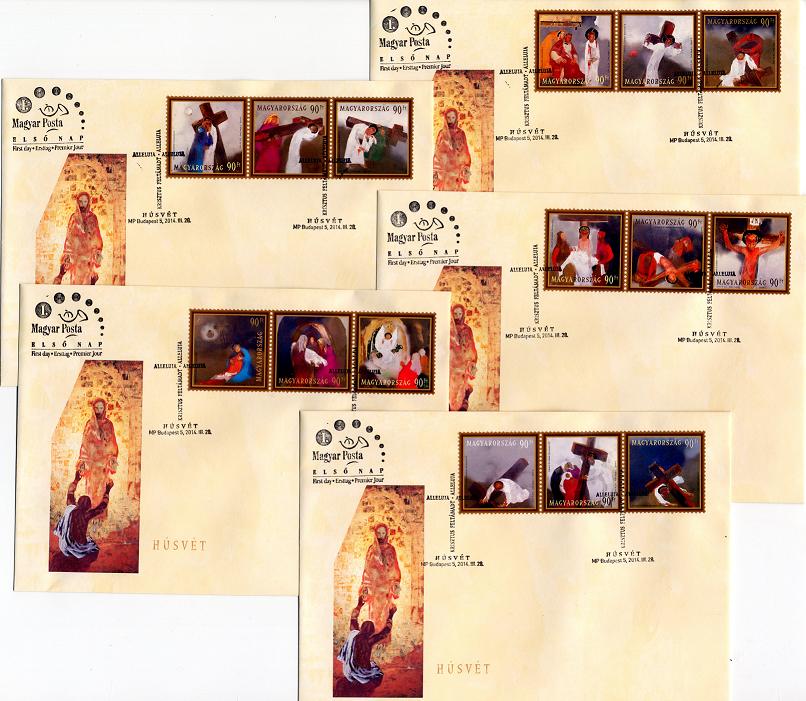 The regular postage stamp Easter 2014 can also be purchased as an exclusive set. The front of the holder is enhanced by a cut-out cross edged with gold foil. An extract from the poem On the Third Day by János Pilinszky appears on the cover, and inside in the space under the miniature sheet there are quotations from the Bible related to the subject of each painting. On the back there is a description in Hungarian and English.