Magyar Posta is issuing a special stamp to mark the European Women’s Handball Championship, which is being jointly organised by Hungary and Croatia. The design of the stamp shows an action scene from a match and the national flags of the countries hosting the European Championship. A special feature of the issue is that the stamps in a sheet are arranged alternately rotated by column. The stamp was designed by the graphic artist Ágnes Berta and produced by the ANY Security Printing Company. It will be available at large post offices and Filaposta in Hungary from 6 November, but may also be purchased from Magyar Posta’s online store. 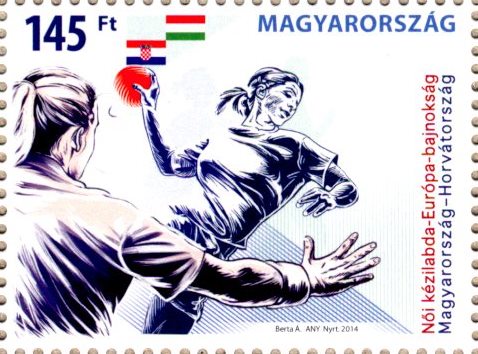 Hungary and Croatia are jointly hosting the 2014 European Women’s Handball Championship between 7 and 21 December. The winners of the competition will secure the right to take part in the 2016 Summer Olympics and the 2015 World Women’s Handball Championship. The matches will be staged in three cities in Hungary (Budapest, Debrecen, Győr) and at three venues in Croatia (Osijek, Varaždin and Zagreb). The final will be held at the Papp László Sports Arena in Budapest. Sixteen countries will compete for the title: the two host countries, Hungary and Croatia, and 14 other teams which came through the qualifying round to reach the championship (Denmark, France, Germany, Montenegro, the Netherlands, Norway, Poland, Romania, Russia, Serbia, Slovakia, Spain, Sweden and Ukraine). The Hungarian team will play its first match of the championship against Russia in Győr on 7 December. Two days later it will take on Poland and the team’s group competition will be completed against Spain on 11 December.The sport emerged around the turn of the 19th and 20th centuries when three very similar games were played: håndbold in Denmark, torball in Germany and hazena in Prague. These were the immediate predecessors of today’s handball. The differing rules were codified and the new set of rules was published in Berlin in 1917. The new name of the sport was field handball. However, due to weather conditions in countries in the north of Europe, handball could not be played as an outdoor sport and it was there that handball put down its roots as an indoor game. A major change occurred in the 1950s and 1960s when the indoor version of the sport came to overshadow the slower field handball. Since 1966 only indoor matches have been played. Adding men’s handball to the Olympics in 1972 and women’s handball in 1976 were new milestones for the sport. Handball in the 1980s was typified by increasing popularity, the consolidation of the rules, the strengthening of the sport and the spectacular development of the technical and tactical repertoire. By the 1990s handball had become one of the most popular sports. (Source: hu.wikipedia.org).